Victoria was an 8 year old girl that died in February 2000. Kouao and Manning, her aunt and partner, were found guilty of murder and sentenced to life imprisonment in January 2001. An Inquiry was set up in April 2001, chaired by Lord Laming with a report Published on 28 January 2003. This report made 108 recommendations. The Children Act 2004 was the legislative spine for the reform and the Every Child Matters: Change for Children was the implementation programme set by the Government.

This infamous picture below shows all the missed opportunities by a plethora of agencies and professionals. If we drew similar ones in many of the serious cases reviews lessons learnt I have no doubt we would find them to be similar. 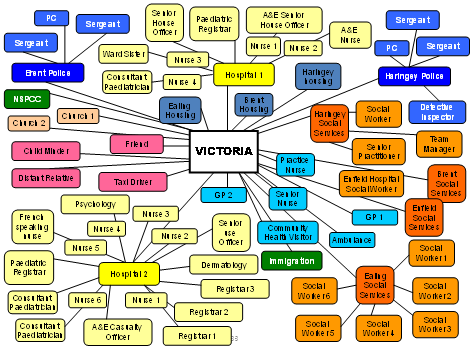 I often think back to this horrific case and the media circus and ‘blame culture’ that followed. Now, twenty years on as we reflect, has anything changed? Is our child protection system a child friendly one?  Continuing child deaths preceded and a further review by Professor Eileen Munro Review was conducted in 2011 to understand if the system is accessible for children and families. Listed at the end are just some of the children that have continued to suffer significant harm which resulted in their death.   We have to look at these serious cases through structuralism of legislation and policy. In this context the UK Governments over the last decade have proceeded to issue guidance and publications on information sharing, thresholds, measurable outcomes for children and their families, multi-agency responsibilities, concepts of partnerships, etcetera.  Does this help or hinder practitioners to keep the welfare of the child at the forefront of practise?

How far have things changed since then? Nothing like as much as I would have hoped, to me the system is still not child friendly, it doesn’t equally capture the child’s voice and is often unsatisfactory at intervening early to rescue, support or protect our children from significant harm.  It is little wonder that children ‘fall through the net’, agencies having missed opportunities, nor share relevant information and in fact worked in silos and not within a multi-agency context.

Lord Laming claimed at the time that Victoria’s death would mark a ‘turning point in ensuring proper protection of children in this country’ (Hopkins, 2007). However, most publicly, the case of Peter Connelly (Haringey, 2008), a seventeen-month-old baby boy who was killed in 2007 in the same London Borough as Victoria Climbié, along with the continuing rising number of child deaths caused by maltreatment (Brandon et al., 2012), supports an argument of enduring systemic failings within the social care and health sectors (Munro, 2011). The inquiry and other research echoed that there continued to be ‘practice’ and ‘systematic risks’ within the system (Webb, 2006; Pithouse et al., 2001).  (Extracted from, Carlick, 20018, p.12)

Following Victoria and Peter’s deaths and the Review of the Child Protection System by Professor Eileen Munro (2011) it concluded with 15 recommendations. The report beckoned for a more child-focused system rather than one centred on meeting central government targets. So I urge for reflection in 2020 on where is the child’s journey and where is the child’s voice? Somehow the child still appears to be ‘lost’ in a system designed to protect them…sadly I do not believe that a great deal has changed and we must look to included children as equal parts. Furthermore technical innovations and early help and multi-agency working must take on new conceptual frameworks and new forms of action and enquiry if we are to not repeat the same poor practices. I advocate for new debates and conversations not to do what we have always done and therefore we aim to reduce the number of child deaths in this country.